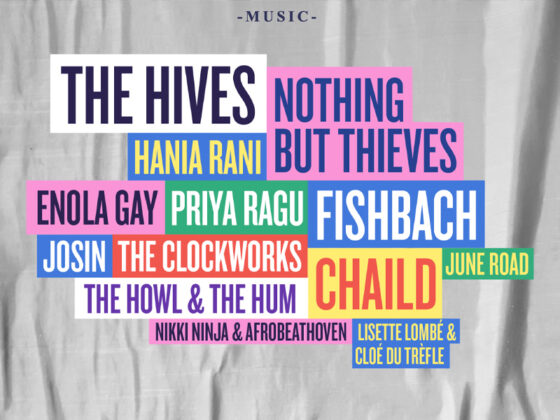 Luxembourg, 04 March 2022 The Siren’s Call Music & Culture Festival announces the full artistic and cultural program of the 2022 edition. After two difficult years, neim nster and den Atelier put together their efforts for the 4th edition of the Siren’s Call Festival, where the audience will again experience the picturesque Grund area from a whole new perspective. The previous three editions in 2017, 2018 & 2019 hosted a fantastic mix of new, international and local artists from multiple genres performing on various stages in the historic center of the city of Luxembourg. Notable acts from the previous editions of the festival include: James Vincent McMorrow, RY X, Francesco Tristano, Parcels, Oscar and the Wolf, Pascal Schumacher, Eels and MGMT, Metronomy, Cat Power, Band of Horses, IDLES and Raftside. Artists across the line-up enjoyed performing in the unique settings and the reaction of the public towards the schedule and program has been overwhelmingly positive. The global pandemic has forced the festival team to hibernate in 2020 and 2021 but this year we’ll throw one of the best festivals that ever took place in the ‘Burg. Together with our partners, staff, technical crew, volunteers & friends, we promise you that we’ll sing along, dance, drink & celebrate all together again: whatever happens, the Siren will Call again! The Siren’s Call Music & Culture Festival has always been a festival in transition, underlining its multidisciplinary aspect. Music will of course remain the main element of the festival whereas literary and artistic disciplines complement the objectives of the festival as well as a dedicated kids program curated by neim nster. The Siren’s Call Music & Culture Festival’s 4th edition will be on Saturday, June 25th 2022 in the Grund. As usual, the 2022 edition of the festival will feature a wide spectrum of cultural activities. The festival collaborates with local talents and offers a platform for their works of art. The Siren’s Call team also works hand in hand with local artists to create original artwork for the festival. The Siren’s Call festival also features an immersive sound installation as well the wonderful crafts of the Nuit des Lampions.
Again, the festival market will feature local makers and designers and will give them the opportunity to present and sell their creations to the festival audience. Furthermore, the market will include regional initiatives with a strong social or ecological background so that they can create awareness for their causes.
Call for applications for the creator’s market: this year the festival will open up to more makers, creators and initiatives and invites to apply via hello@sirenscall.lu
The festival is inviting the audience to participate in a wide range of workshops. Festival visitors can learn dance moves, relax in a yoga class or craft together with their friends and children.
Kids are always welcome and the festival will also offer dedicated activities for the young ones. The festival is also hosting a radio 100Komma7 Live Lounge, with live broadcast from the festival, interviews, radio shows, workshops & 100Komma7 resident DJ sets throughout the festival day.
Music line-up: The line-up features a diverse range of national and international acts including The Hives (SWE) | Nothing But Thieves (UK) | Hania Rani (PL) | Enola Gay (UK) | Priya Ragu (CH) | Fishbach (FR) | Josin (GER) | The Clockworks (IRL) | The Howl & The Hum (UK) | CHAiLD (LUX) | June Road (BE)
Performance: Lisette Lomb  et Clo  du Tr fle
Young Audience: minim nster is excited to be a part of this fourth edition with several shows and activities, such as Nikki Ninja & Afrobeathoven (LUX) and others
Culture: Installations, art & dance performances, design exposition, creator’s & initiatives market, workshops
Food Village: Locally produced and curated food; wine bar with bio-dynamic wines and cr mants

Useful information:
Doors: 3pm
Ticket price general admission: €52 + costs
Previously purchased tickets for the 2020 & 2021 editions remain valid and will be honored at the doors
Free admission for kids below 10 years of age.
All children below 14 years of age must be accompanied by an adult.
There will be sanitary measures in place; we recommend ticket holders to consult sirenscall.lu as well as the social handles before coming to the festival in order to verify which measures will be effectively in place on the day of the festival.
Info & tickets at www.sirenscall.lu
Facebook at www.facebook.com/sirenscallfestival/
Instagram at www.instagram.com/sirenscallfestival/

The best live band on the planet is headlining the 2022 edition of the Siren’s Call Festival! It was nearly twenty years ago that those dashing, dangerous Swedes The Hives unleashed their debut album, ‘Barely Legal,’ and set the music world on its head. In the two decades since, the unlikely black-and-white rock-and-roll heroes have filled the mantels of Hive Manor with countless awards, sold millions of records, and blown even more minds with a superhuman live show that shakes the halls of Heaven and rattles the bowels of Hell. The Perfect Game of Bowling, Duke of Earl of Stage Right Left Front and Center Pelle Almquist and his fellow band mates are ready to exceed all expectations.

Hailing from Southend-on-Sea in Essex, England, Nothing But Thieves make passionate guitar-based rock that balances indie artfulness with a pop sensibility. Formed in 2012, Nothing But Thieves feature singer Conor Mason, guitarist Joe Langridge-Brown, guitarist Dominic Craik, bassist Philip Blake, and drummer James Price. Nothing But Thieves are no strangers to powerful anthems, with raw emotion before launching into a huge chorus full of elated melody and affecting lyrics of hope and passion.

Hania Rani is a composer and musician who splits her life between Warsaw and Berlin. Her compositions for piano were born out of a fascination with the piano as an instrument, and her desire to interpret its sound and harmonic possibilities in their entirety and in her own way. Like all great artists, Hania Rani is ever evolving musically, and ever restless in her musical creations, seeking where her next project might lead her and we are delighted to be part of her journey.

Shortlisted in the BBC Sound 2022 and supported by tastemaker airplay from Radio 1, BBC Asian Network, 1Xtra and 6 Music, Priya Ragu is poised to achieve a major breakthrough. Silky R&B and vibrant electro beats create her unique sonic tapestry: genre-blurring raguwavy sound – music that is bathed in the sounds of their heritage, from stunning Kollywood samples (originating from Tamil Nadu in South India) and Krishna mantras to traditional tabla and the Tamil language.

Fishbach created quite a stir with his first Album “A ta merci” – culminating in a nomination among the revelations at the Victoires de la Musique in 2018 – Now Fishbach is back with his her new album “Avec les Yeux”, released in February 2022. The musician stuns with her spectacular yet haunting voice, 80s disco production and visuals.

Born in Cologne to a Korean mother and German father, both of whom are opera singers, Josin grows up in a household with music at its center. Josin’s music is sometimes compared to that of Radiohead and Thom Yorke; who she also cites as the inspiration behind her songs. Josin’s music sees a dynamic blend of electronic jolts, vibrating sounds and poetic vocals. Somewhere between heart and mind the profoundness of her songs seems to resonate.

The Clockworks are a band to savor in these dark days. Formed in Galway and drawn together by a mutual appreciation of all music, past and present, The Clockworks are a four-piece comprising James McGregor on Vocals/Guitar, Sean Connelly on Guitar, Damian Greaney on Drums and Tom Freeman on bass. The Irish four-piece have a strong, punchy dynamic, drawing on intense post-punk influenced music to soundtrack snarling kitchen sink observations.

The Howl & The Hum

The self-proclaimed “miserable disco” band, The Howl & the Hum’s music is a impressive blend of alternative rock and new wave, laced with darkly poetic lyrics. Their musical spectrum spans from electronic minimalism at one end, to explosive indie rock at the other. Their inspirations ranging from Leonard Cohen and Phoebe Bridgers to Lizzo and Kendrick Lamar, and have been likened to Massive Attack, Radiohead and Alt-J.

Local hero CHAiLD is a queer, rising electro-pop Artist from Luxembourg. His unique, soothing yet intense voice grabs you by the gut, only to let it go with a rush of exhilaration and a tear in your eye. CHAiLD is also a generational voice for queer youth who crave self-expression and want to be heard. Outside of songwriting, he also takes his art into new dimensions through fashion and modelling, which complete the full CHAiLD experience.

An explosive ninja rap experience in Luxembourgish for the whole family, with lots of great beats, a slamming flow, sick rhymes, and imaginative wordplay. Nikki Ninja & Afrobeathoven is a musical performance dedicated to younger festival attendees (for anyone 7 years and older), bringing together the world of Luxembourgish Hip-Hop and Jazz through the fusion of the NICOOL collab (Nicole Bausch, Nadja Prange and Dennis Scholtes) with Pol Belardi & Afrobeathoven. Nikki grew up with all her friends in a typical small Luxembourgish town, called R ppeldeng. She wants to escape the quiet countryside and go on a fun quest, shake things up a little bit. But how? Together with her crew she makes a run for it and joins us in the bustling city for a one-of-a-kind party on stage, rapping like there’s no tomorrow: the people she bumps into, the experiences that shape her journey, the crazy stories that surround her hometown,… Are you ready to share Nikki’s fantastic adventures with us?

This show by Lisette Lomb  and Clo  du Tr fle, is a real quarantine project, combining slam and electronic music. Lisette Lomb  is a multi-faceted and border-crossing artist, who is inspired by poetic, scenic, plastic, activist and educational practices. Her writing and struggles are based on her own mixed-race background, her journey as a woman, mother and teacher. The project Br ler Danser is a plot twist in motion. There is no opposing team. The enemy is time, which tirelessly leaves its mark. It is the history of finding oneself through movement as words and sounds intertwine. The result is an organic, pulsating performance by a unique duo. It is a journey to the land of night and poetry. It is a dawn, for a new kind of hope.